Sheep Management at the Trials

Sheep are the players at the Kingston trials. Their management is important for the trial, not just from a good shepherding standpoint, but also because sheep need to be fit for each competitor that approaches the post. Our job to provide even sheep for Canada’s biggest trial, is one we take seriously.

To that end we attend them carefully. Sandra Massey from Dayton, Nevada and Hamish McMaster from Indian River are their shepherds this year--they shall not want. The sheep are trucked to Grass Creek, from Picton, by one with years of experience moving livestock. They arrive with minimal jostling, at cool times of the day if heat is an issue. Once unloaded, they take in the park, for twenty four hours, “settling in.” At night they are folded up to their new set out digs, at the north end of the park, where they can be protected from brush wolves. They are released at day break, to graze for an hour before the start of the trial. When we need to feed, we feed only top quality second cut hay, encouraging the flock to fortify themselves, between runs, both in the exhaust and at the set out. They have water at all times and access to shade. Since the City of Kingston acquired the property adjacent to Grass Creek, we have rotated the sheep through the new land. They make a great job of tidying it up with grazing, in the penultimate environmentally friendly means of clearing overgrown land. The sheep are moved through the set out handling equipment by a pair of experienced shepherds.

Nearly 650 sheep comprise the trial flock. They are sorted as much as possible at Waupoos, by Erin Roughan, Bob Fleugal, ensuring sound, healthy sheep climb on the truck. Uniformity is one of the goals of the sort—all white or broccle faced sheep are preferred, for similarity of temperament and type. Even sheep provide a level playing field for each dog and hand, a responsibility of trial management. Every handler will have four fresh sheep for the qualifying trials. Sheep will be rerun for the second qualifying trial, and once again for the final championship on Sunday. 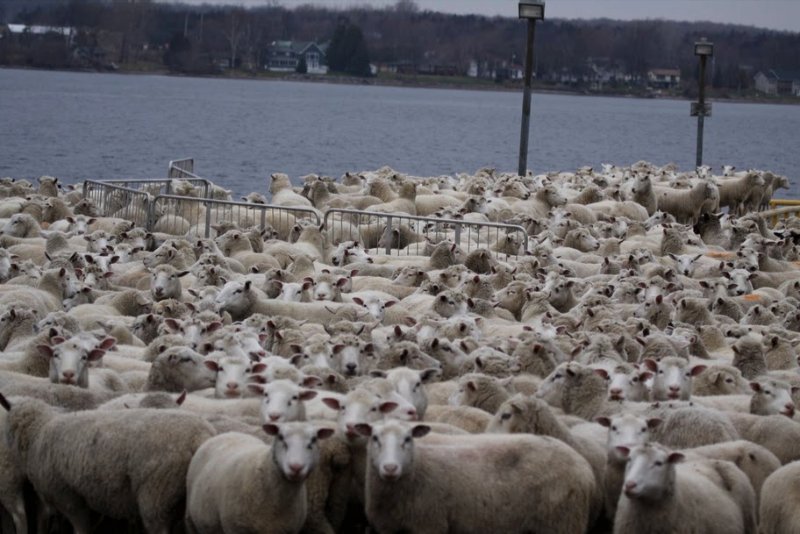 Waupoos Island is 50 kilometers west of Kingston in Lake Ontario and is a kilometer off shore in Prince Edward County. The sheep come from a flock of 1400 ewes which have been on Waupoos Island since 1976. Bob Fleguel and Erin Roughan purchased the then 500 ewe flock in 1980 and have increased the flock over the years with the support of their five children all of whom continue to have an active interest in the operation.

Harinui Farm is a 100% pasture based operation. The island is 900 acres and the farm uses 85%, some owned and the rest rented. The breeding now is predominantly Dorset with some Romonov and Cheviot influence. In the last week of April the ewes are tail crutched and set stocked on the pastures for lambing in May. They stay there till late July when they come in for weaning. The ewes are then shorn and this year 600 of them have come to Grass Creek.

In the fall when the pasture is finished on the island the ewes are barged off the island for winter feeding. In March the ice conditions usually allow the ewes to be walked back to the island where they finish up the winter feeding program and are prepared for lambing.

The ewes are almost always worked in large mobs using both heading/eye dogs and huntaway dogs along with ATVs, so when they come to Grass Creek and are worked in small groups they are definitely out of their comfort zone.

In March, the Waupoos Island sheep return to the Island. Here are videos of Amanda Milliken and two of her working border collies who helped with the task.