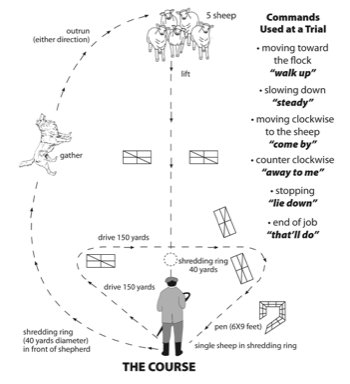 The preliminary rounds of the Kingston Sheep Dog Trials are an Open sheepdog trial class. The Open class in sheepdog trials is truly "open" in all senses of the word: any dog, regardless of breed or registration credentials, and any handler, regardless of qualifications or experience, is permitted to pay an entry fee and step up to the post. These preliminary rounds will determine the top teams who will compete for the Championship on Sunday. The preliminary Open course will be as follows:

The course begins with the Outrun (20 points). The handler will send the dog (according to his or her choice) either clockwise or counterclockwise. The dog must cast out in a deep, pear-shaped arc (without additional commands) that will end when the dog is directly behind the sheep. Dogs who arrive too close to the sheep may upset them; dogs who travel in too wide a path will not reach the sheep quickly and efficiently. Dogs who turn onto their sheep before getting behind them ("coming up short") or who overshoot them ("overrunning") will have points docked from their outrun scores. Dogs who stop or who need to be stopped during the course of the outrun will be strongly penalized. Dogs who "cross over" between the handler and the sheep will often lose as many as 19 points.

The Lift (10 points) is the critical point at which the dog and sheep meet and assess one another. The sheep should start down the field in a straight, orderly fashion. It is at the lift that the dog and sheep begin a relationship that will be maintained throughout the remainder of the run. Dogs that push too hard will cause the sheep to be wild and unsettled; dogs that are too tactful may have trouble convincing their sheep to march along the course. If the dog has been kind but authoritative, the sheep will be respectful and orderly. Points will be deducted for too slow or too rough a lift, or for sheep moving in any direction other than straight to the
handler.

The Fetch (20 points) begins immediately after the lift. It should be absolutely straight and should, like all phases of work in the trial, be efficient and workmanlike. The sheep should come right through the center of the fetch gates in the middle of the field and pass behind the handler at the post. Points will be deducted for a dog who "rings" his sheep (runs all the way around them on the fetch), or who pushes the sheep off the line, or whose sheep miss the fetch gates, or whose sheep turn the wrong way around the handler's post.

The Drive (30 points) starts at the back of the handler's post. The sheep must go in a straight line to the first drive gates, make a sharp turn toward the second drive gates, and return in a straight line to the pen. The straighter the lines and the tighter the turns, the better the drive score will be. Points will be deducted for imprecise lines, missed panels, and (as on the fetch) for dogs who ring their sheep rather than remaining behind them.

After the pen, the dog and handler will take the sheep into a marked ring for the Shed (10 points). The handler must line the sheep up in a row and call the dog through to turn on the last single. In the ideal shed, the sheep in front of the dog will feel able to escape, and the last sheep will feel unable to join them because of the authority of the dog. Proper sheds are taken on the head, with the dog face to face with the chosen sheep before turning her. Shed points will be deducted for too much of the work done by the handler and not enough by the dog, failed attempts, and sheep that leave the marked ring.

On Sunday, the top-scoring teams at the Kingston Sheep Dog Trials will compete for the championship honor. This double-lift course is much more demanding than the courses of the preliminary rounds, and the highest-scoring team will have truly accomplished something very special. Both judges will judge the the double-lift courses, and their scores will be added together as an aggregate. Handlers will be allowed thirty minutes each to complete the course.

The Gather: The dog will be sent for one lot of ten sheep and fetch them through a set of fetch gates. When the sheep have reached a point about twenty yards from these gates, the handler will command the dog to "look back" and then ask the dog to leave the sheep he has just fetched and set out on a second outrun for a second packet of ten sheep that in all likelihood cannot be seen by the dog. Unlike in the preliminary rounds, the direction of the outruns in the double-lift are no longer the handler's choice: all dogs will be sent the same predetermined way for the first set of sheep, and then the opposite way for the second. Leaving the first set of sheep to seek a second, unseen set requires the ultimate act of trust and obedience on the part of the dog. Once the dog has fetched the second set of sheep through the fetch gates, the two groups of sheep will be rejoined, and the twenty sheep will continue down the field to the handler. The gather is worth a total of 100 points (200 aggregate): 20 for each outrun; 10 for each lift; and 20 for each fetch.

The Drive: The drive will be longer and more challenging than the drive of the preliminary rounds, but in principle it will be the same: the dog will drive the sheep in a triangular course through two gate obstacles and then back into the shedding ring. Even though the dog is driving many more sheep than he had in the preliminary rounds, lines should still be as straight and turns as tight as possible. The drive is worth a total of 40 points (80 aggregate).

The Shed: The so-called "international shed" of the double-lift finals is much more intricate and advanced than the regular shed of the preliminary rounds. In general, handlers will move through the first part of the course in about fifteen minutes, leaving themselves about ten to fifteen minutes to accomplish the shed. The goal of the dog and the handler is to separate five collared sheep from the rest of the group, allowing the uncollared sheep to drift out of the ring. All of the sheep need to be regathered and shed again if one of the collared sheep leaves the ring with the uncollared ones. The shed is worth a total of 20 points (40 aggregate).

The Pen: The pen cannot begin until the five collared sheep are properly shed off from the fifteen uncollared ones. On completion of the shed, the handler must proceed to the pen and ask the dog to fetch the five collared sheep. The handler is forbidden from helping the dog drive the sheep to the pen. The pen is not complete until all five sheep are inside with the gate closed. The pen is worth a total of 10 points (20 aggregate).

If you are interested in learning about the details of how the trial will be judged, you can read the judging guidelines put out by the United States Border Collie Handlers Association. 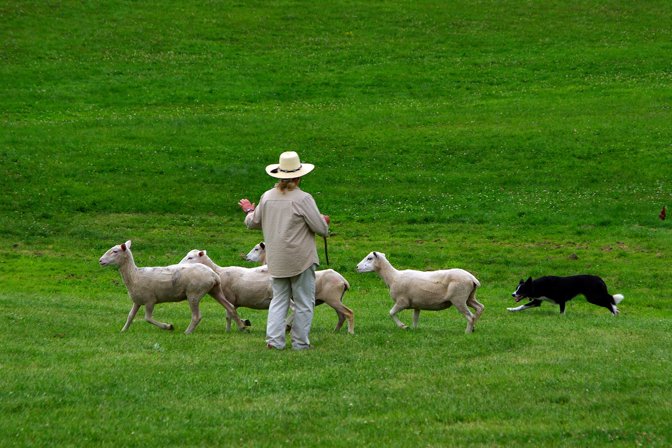