A sheepdog trial may look like an obstacle course (or perhaps a live video game), but there is a deeper purpose to it. It's designed to test not just the dog's obedience to his handler's commands---important as that is---but also his inborn working ability. Although these trials are open to all breeds, rarely will you see anything but a Border Collie competing at this level. That's because the Border Collie is a breed specifically developed to be useful partners in the raising of livestock. For the same reason, you'll notice a lot of variation in how these Border Collies look---they are bred to work a certain way, not to look a certain way.

What are these inborn qualities that make Border Collies such good workers? One of the most important is balance, the dog's innate sense of where he has to be to keep the livestock together and make them go where he wants them to and/or keep them from going where he doesn't want them to. He has to feel the right spot, not only how far left or right of the sheep but how close---close enough to put pressure on them but not so close as to panic or scatter them.

Power is the ability to make ornery, mean sheep do what they don't want to do. It's probably made up of determination, confidence, courage and moral authority. It includes bite when absolutely necessary, but you will rarely see a dog bite here (and if he does he will likely be disqualified). A dog with real power is not just one who can face down challenges to his authority, but is actually less likely to be challenged in the first place. Style is the dog's physical manner of working, mainly the combination of posture and stare that we call "eye." He needs to have enough eye to maintain contact with his sheep and evoke their respect, but too much eye can make him sticky (unwilling to move).

Physical traits are important---he must have the sight, hearing, speed, agility, stamina and strength to get the job done. But mental and emotional traits are even more important. He must have the intelligence to understand his training, to generalize, and to learn from experience. He needs the initiative to take charge when the situation requires it, and the biddability to take direction when it contradicts his instincts. He must be able to size up a situation quickly and respond to sudden changes. He needs stock sense---the ability to read livestock is partly a product of experience, but also partly inborn. Finally, he must have the keenness and character to keep working and not give up when it's hot and he's tired and people are hollering and he's a little confused and the sheep are fighting him every step of the way.

Only careful breeding for working ability alone, without regard to superficial traits like physical appearance, will produce dogs like this. Dogs must be trained to their full potential, their performance in challenging work situations must be evaluated, and only the good ones bred, with thought given to which sires and dams will best complement one another to produce the best offspring. Thus, as you watch from the sidelines, breeders will be closely watching too as they try to make these kinds of evaluations, because a sheepdog trial is one of the best tests of the many traits that are so valuable in the working sheepdog. 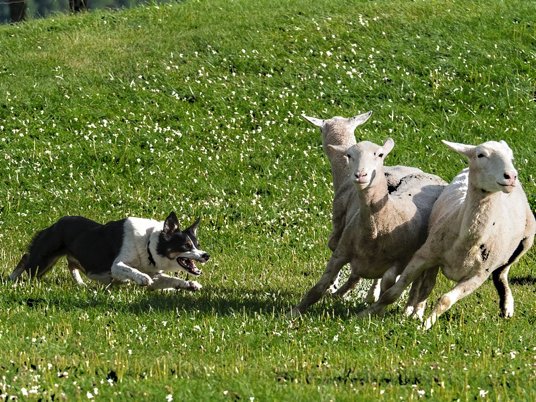